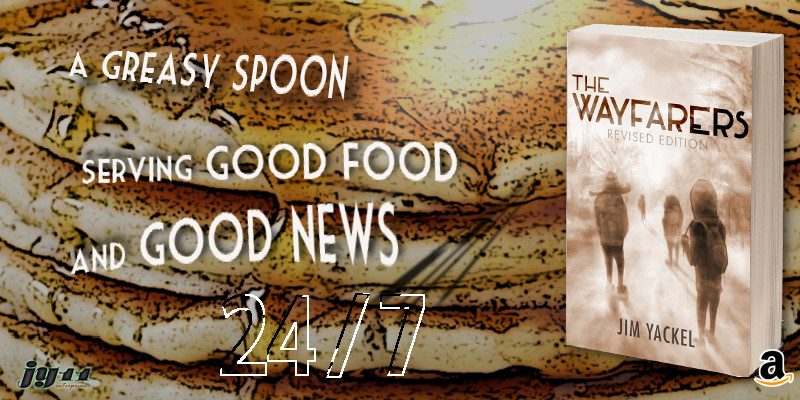 The Sultan of Short-Order Cooking

“After nearly dying from alcohol poisoning, Jesus restored her and gave her direction and ambition…”

*A blog written by Jared; one of the many minor yet notable characters who appear in the novel The Wayfarers: Revised Edition

Oh…ow…man, this is serious. My head is really killing me again, and everybody says I need to get it checked out. But I can’t afford the government healthcare, and I really can’t afford to see a doctor. Even with the headaches and blurry vision, I’d rather be on the road with my band Coffee with Isaiah, but instead I’m pulling the night shift as a cook in my mom’s diner. Ah, this job is money…more than the band makes. Dude, you know it’s hard to make money in a Christian rock band; especially if you don’t sound like the “God-approved” worship faves like Hillsong, Third Day, Michael W. Smith, or Casting Crowns. Man, those bands are so formatted, predictable, and boring!  But hey, at least I’ve got a Soul Patch and various tats, so I’ve got the hip look goin’ on!

I’m a purveyor of fine pancakes and a sausage slinger. I bust out the bacon and hash-up the home fries. Yup, I wing the waffles and prepare omelets to ogle. I am the Sultan of Short-order Cooking and that keeps me off the streets – but yeah, I’d rather be out on the road.

I don’t get many days off as mom needs my help. Even though mom owns this blessed greasy spoon, she’ll often pull the night shift with me as the waitress, being that she got used to being a night owl before coming to the Lord. He saved her soul and her earthly life – as she was all about sex, drugs, and rock-n-roll. After nearly dying from alcohol poisoning, Jesus restored her and gave her direction and ambition, and that resulted in owning a diner of all things! She raised me without the man who served as the sperm donor, er, I mean the deadbeat who is my biological father.

It’s our regulars who keep us in business – maybe because our food keeps them regular, ha-ha! But man, times are like so tough, ya know! Denny’s and Friendly’s have the name, the décor, and the expansive menus, but we are Spirit-driven and have the personal touch. And, I can cook circles around anyone they’ve got in their kitchens! Our portions are bigger and our prices are lower.  Still, it seems like more and more folks would rather support the chain restaurants and that is slowly killing us. Such are the times in this fallen world.

We’re open 24/7, and we’ll serve you anything on our menu at any time of day – burgers, gravy fries, cheese steak sandwiches, the aforementioned breakfast items, and all kinds of good grindage – even salads for you health-nuts that insist on eating rabbit food. But, if you want the biggest and best portions, you’ve got to come in between 10 P.M. and 6 A.M.

We get some interesting folks in here, like this guy who just came in who looks like Morgan Freeman rockin’ dreadlocks.

Who’s partaking of this “good grindage” and who’s cooking it? Read The Wayfarers: Revised Edition