The Religiosity of Politics

2012- it’s the year that some believe will mark the end of the world while others plan to be around to vote in a Presidential election. 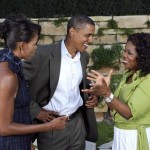 Presidential candidates are viewed as demigods by far too many Americans. It could be said that the members of the U.S. Senate and the House of Representatives are viewed in a similar light. “When the Republicans sweep in, we’ll shut down Obama and get this country back on track” was the collective corporate mantra mouthed by the multitudes and the radio talkers heading into the Midterm elections of 2010. After the dust was swept up, the Republicans had gained a slight edge and as of this writing in January 2012, the U.S. is even further off track.

The media frenzy began early, and as the nation is being dragged toward the 2012 Presidential election, the mantras are much the same as in 2010; to stack and paraphrase: “when we get a Republican back in the White House, we’ll get this country turned around and people will get back to work and the economy will be good again and we’ll be respected by the world and our best days are yet to come!” And so it goes on, ad infintum, ad nauseum, blah blah blah.

In the 2008 Presidential election, the liberal left raised up and anointed a messiah, and they did not call him Jesus – they called him Obama. Oprah Winfrey referred to him as “The One” and a disconnected, pacified, soft, self-absorbed, and politically-corrected populace agreed that this “One” would bring “Hope and Change” and save us from uh…um…yeah, whatever those people on T.V. said.

It has been said by some that America got what it deserved, but this writer is not here to judge; as I am not He who has the power to judge. Still, I must point out that we have turned politicians and the political process into a false religion. We vote for fraudulent saviors that we hope will create social and economic conditions to allow us to continue to indulge ourselves, our greed, our lust, and our fantasies. In truth, that hackneyed cliche’ still rings true: freedom isn’t free. In everything there is a cost, and perhaps we ourselves are no longer willing to pay it.

There is one savior and He is Jesus; not Obama, Romney, Pelosi, Reid, or insert your favorite political flavor here. There is not one elected – or should I say selected – career public official who is going to provide more than temporal hope, change, prosperity, or most importantly of all – security; except for themselves.

America, as is the entire world, is radically changing and will continue to do so. If I were permitted to offer advice as the hour grows late, it would be to go humbly and pursue the real “One” – the one who did what no politician would do for you, and that’s die for you.