The Mall Santa – a Wayfarers side-story 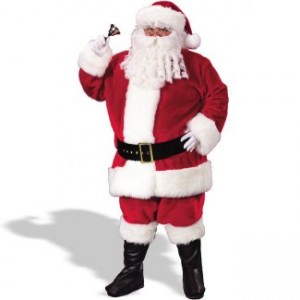 “It’s a little extra money, but this mall doesn’t pay much” he laments to anyone who may lend an ear and a minute of their precious time. “They certainly don’t pay enough to endure these overindulged brats who haven’t been taught two of the most simple yet increasingly rare phrases in the English language – those being ‘please’ and ‘thank you'” he’d continue if there was a modicum of the listener’s precious time. “I blame their fathers who play video games and won’t grow up and their mommies who never left their college sororities” he’d continue if his audience remained rapt.

Mall management set him up in his shoddily-built North Pole in the center hall with J.C. Penny on his aft and Bath and Body Works on the fore. It’s painted white of course and the cheapskates could have used heavier wood he thinks – and indeed they could have – but times are tough and getting tougher, so costs need to be kept low. But, the elves are cute in their red coats and pointy hats, green tights and red shoes – but he needs to remind himself that despite his loneliness these girls are high school aged and he’s old enough to be their grandfather.

He’d been sitting on his red and green velvet-upholstered chair for all of three minutes when one of the hyper, undisciplined brats spilled Mountain Dew in his snowy-white beard; and it’s a real beard and not part of the costume! Ah, but he won’t yell in protest this time as management has threatened to fire him if he does so again. He’s been warned twice not to use expletives in front of the kids – even though many of the kids are possessed of a mouth more foul than his! No, this time he’ll just whisper in 6 year old Logan’s ear:

“There’s no such thing as Santa Claus. I just dress up in this hideous costume for seven-twenty an hour and let you kids live in a foolish fantasy. Your father is cheating on your mother with one of his nurses. I know this because you father is my urologist! Your dad and mom are stupid to give a six year old kid Mountain Dew, yeah – over-educated but stupid in general and kid, you don’t have ADHD and don’t need to be doped-up on the Ritalin they’ve got you on. Now, Logan – and that’s a sissy name by the way – the information I just gave you is better than the overpriced crap your parents will put under your tree. Now get off of my lap!”

As Logan slid off of the Mall Santa’s lap, spilling what was left of his 32 ounce Mountain Dew fountain drink on the black plastic costume boots, the child staggered back to his mom and dad as though he had been hit in the head and was struggling to remain conscious. As the Mall Santa offered up his most jolly “ho ho ho, Merry Christmas” Logan was overheard saying “mom, Santa said dad is cheating on you with his nurse.”

Indeed, Ted the Mall Santa had the physical gifts for the job: a jelly belly, red bulbous nose, long white hair and thick snowy white beard. His speech was eloquent albeit salty and abrupt; and his voice was deep and sonorous and it served him well first in his career as a young DJ on WOLF AM in the 1960’s and 70’s and then in the capacity of an evangelist on the streets of downtown Syracuse.

But evangelizing was then and this was now and it seemed that God had abandoned him. For all of the passionate and heartfelt exhortation of a simple Gospel message that he put forth at the bus stop on the corner of West Fayette and Salina Streets, it seemed that it fell on deaf ears – despite the sonic clarity of his voice. “Look at this crazy, Godless world” Ted would think to himself in his quiet moments; “and look what God has allowed to happen to me.”

Indeed, his Social Security didn’t fully cover his living expenses, which included an efficiency apartment in DeWitt near Shoppingtown Mall where he now sat in December of 2009. He’d pick up odd jobs where he could, which included this now annual stint as Santa Claus. Ted’s wife Maryann was the one person he loved in this world, and she passed away in 2007 with no life insurance policy. The Mall Santa was struggling and alone and not feeling well physically. Everything on him hurt; especially the arthritis plaguing his right hip. Ted walked with a cane, but that cane did nothing to support the burden of his broken heart and limping, aching soul. As another little boy chortled “some kid spilled soda on Santa’s beard and on his boots ha ha!” all Ted wanted was a hearty hit from the flask containing Rebel Yell that was hidden in a pocket of his Washington Redskins sideline-style jacket that hung in the mall office. Ted purchased the coat from a Salvation Army thrift store for nine dollars and though he disliked Washington’s NFL squad, it was the only warm coat the store had for sale in size XXL on the day of his visit.

So, as it was now on December 16th, 2009 – at 7:31 PM eastern time as a man in a black coat accompanied by two others: someone in a green parka who looked a tad like Morgan Freeman and a 35 pound black dog – all prepared to leave a Dollar Tree store a few miles away – Ted the Mall Santa wondered why so many kids were in the mall when they should have been getting to bed because it was a school night after all! As he wondered, 70 year old mall security officer Gil Stowe – a retired Manlius cop trying to supplement his pension – walked up to Ted’s red and green “Santa’s Chair” that was trimmed with plastic holly and said “the boss says you all can clock out for the night, okay? Ted, he wants to see you before you leave.”

As Gil Stowe sauntered away like the tired old man that he was, a four year old girl and her young mother approached the shabby “Santa’s Workshop” while a 17 year old elf named Megan who was responsible for taking photos moaned in discontent as she thought she could leave and it had been four hours since she’d had a cigarette.

“I don’t want to sit on your lap” she said with a nervous giggle, and “Santa” was confused as to why this woman would come to talk with him in place of the child. “I know your name is Ted because I recognized you when you came in earlier. You weren’t dressed in your costume yet.”

“Yeah, that’s right, Miss – my name is Ted and did your child want to talk with me? – because I can get the heck outta here now” was his anxious response – and his voice evidenced considerable warmth and depth even when he spoke in a hurried, hushed tone.

“No, Ted. I just saw you so I wanted to thank you” the young woman replied – she and her daughter being dressed in parkas as there was a brisk December wind blowing and it was beginning to drive snow. “I heard you preaching at the bus stop downtown in 2002 and it changed my life. You were yelling and most people were put off and were mocking you, but you said that Jesus loved us and wanted us to spend eternity with Him. You said there was no other way to Heaven. I remember you yelling at the crowd to ‘stop being morons by messing with your eternity’ to paraphrase you. You said that faith in Jesus was so simple that a child could have it and it was those who had the faith of a child that would inherit the Kingdom of Heaven. You said Hell was for ‘overly-educated narcissistic eggheads who were too smart to accept the simple, basic truth of Jesus.'”

“Ted, you had a way with words. It was brash, perhaps a bit insulting for an ‘educated’ person like me, but you reached me and others down there as well. Because of your rough-edged approach and the big radio voice of yours, a few people were reached and came to Christ that I know of. They despised you, but they thought about what you said and it eventually sank in.”

“I don’t know what to say, um…” Ted responded with both humility and shock.

“My name is Katrina Whaley. Me and my husband John own and manage WSSS-FM 106.5, the new Christian Talk station that went on-air last month in central New York. I want you to host a daytime show tentatively titled The Unvarnished Truth. I want to have it on-air January 2nd. I’ll start you out at $55,000 a year. I believe with your unvarnished style and captivating voice, we’ll get national syndication, which would substantially increase your salary. Ted, all you have to do is follow your heart on the air and of course handle callers that might disagree with you. Can you come buy tomorrow morning so we talk business and get this rolling?”

“I’ll come by and we’ll talk turkey, Mrs. Whaley – especially considering that I’m about to get fired from this terrific gig!” Ted responded with giddy sarcasm, and for the first time in months he was smiling as he finished with “but I wonder what we’ll get off the ground first; us or the show…”