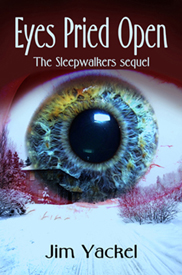 America was warned but most didn’t listen. Darkness has settled upon the majority of the contiguous fifty states during a brutally cold and snowy winter. Many have frozen or starved to death, or was it the strange flu that killed them?

The military and government agencies have taken control with such rapidity that it seems they must have had prior knowledge that the event that brought darkness was coming. But is it the American government that’s truly in charge? Has a promised “transformation” finally been achieved? And when a transformation is considered, it it merely geopolitical or are there spiritual and religious elements involved?

Cheryl Seagraves struggles in what could be referred to as the Modern Stone Age. Her husband Jeff donned a black ski mask on YouTube and offered a warning to the nation, and now he’s gone missing. Cheryl is left to care for a young girl that Jeff rescued after the child’s parents were killed by government forces intent on enforcing Martial Law. With her husband gone without a trace, will the strain of caring for the child while she endures the heartbreak of his absence be too much for Cheryl to bear? Will she fall into old vices as a means of coping? Will she be forced to question the faith in Christ that has been her rock and fortress?

Eyes Pried Open picks up where The Sleepwalkers left off, and could be a hint of things to come for an America lulled to sleep in the cozy bed of modern convenience and freedom taken for granted in a world headed into the End Times.

Read an excerpt from Eyes Pried Open Free Below: