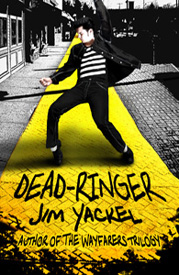 Prophetic dreams and visions? Dire warnings of imminent apocalypse? A man who impersonates Elvis Presley for his living resides in the same small town that was the birthplace of The Wonderful Wizard of Oz author L. Frank Baum. We all know that flying monkeys were a part of the journey to the mythical Land of Oz, but could they also be demons straight from Hell? This Elvis impersonator thinks so, as he sees them in his dreams and visions and also in the tangible reality of the streets of the rustic village of Chittenango, New York.

This man, named Jesse Same, has grown weary of the Elvis gig and desires to do something new with his music career. Likewise, he desires to have more time with his young son and that means wrestling him away from his manipulative and controlling ex-wife and her hard-driving new husband. They don’t subscribe to Jesse’s strong faith in Jesus and are troubled that the young son has developed his father’s passionate love for the Lord. How far would the ex and her husband go to keep the young son from Jesse? Would the young boy put himself into great danger in order to be with his dad?

As this man who is a dead-ringer for the King of Rock n Roll dreams prophetic dreams, the supernatural creeps through the cracks in the walls that separate it from the natural realm as those who are bound to this world may soon witness the end of the world as they know it. Will the man’s dreams and visions come to pass? Is there any hope for the individuals who appear in his dreams?

Read an excerpt from Dead-Ringer Free Below: