To coincide with its new reality show called Doomsday Preppers, the National Geographic Channel conducted an online survey of 1,007 adults in the USA. The results of this survey indicate that 61% of Americans believe the nation will experience a major catastrophic event within the next 20 years, but only 15% of those polled feel they are fully prepared for what will come. 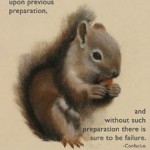 Without preparation there will be failure

The events will transpire, and it does not require one to be blessed with the prophetic gift of the Holy Spirit to see tumult and turmoil on the rise. As Israel is contemplating an attack on Iran’s nuclear facilities while the former Persia is taunting America through threats of closing the Strait of Hormuz, as Syria is in a state of civil war, as the Muslim Brotherhood is harvesting the fruit of the Arab Spring in Egypt, as the Dollar and Euro are perched on the precipice of collapse – trouble is rising like a bad moon on a fiery horizon.

It is costly to prepare for a period of time when the basic necessities of life could be virtually impossible to acquire; when the very freedom to drive to the local supermarket may be lost – if that favorite grocer is even open for business. A stockpile of canned goods, bottled water, MRE, matches, Sterno, batteries, battery-powered radio, a rifle and ammunition, and warm clothes may be too much for many Americans to afford in January 2012. But, this aforementioned stockpile which should include a first aid kit and water treatment tablets must somehow, someway be accumulated – and quickly.

Too many in America cling to the “it can’t happen here” mentality. They consider “preppers” to be kooks, pack-rats, and hoarders – and will guzzle 30 packs of Keystone Light while watching shows like “Doomsday Preppers” for the pure entertainment value before passing out just to awaken hung-over, smoke a Marlboro, shower, grab a cup of coffee at the local mini-market, and head off to their union jobs that they plan to retire from in order to collect a promised pension that they can’t envision ever disappearing, because “they paid into it.”

The denial of what preppers prepare for is rooted in a learned disquietude. The abominable events will transpire, and those who are not ready will perish. They may starve to death or have their hearts fail them through fear. Some will be shot in the head while attempting to steal a prepper family’s food. It can happen here, and it will…

The simplest and most effective form of preparation is to accept Jesus as your Lord, Savior and propitiation for the sins that we all commit. He is the fail-safe and the guarantee of eternal life, and through that faith you will be called up and spared the wrath of the Great Tribulation that will come after the storms that are forming on and moving in from today’s horizons. Through that faith you will pass into paradise should you die as America and the world becomes increasingly unsafe and inhospitable.

If you are a prepper who has not yet accepted His grace on faith, you are indeed leaving out that most important part of your preparation.