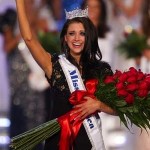 Newly-crowned 2012 Miss America Laura Kaeppeler would not let her father’s jail time for mail fraud be a deterrent to her pursuit of the crown, but instead stated that she desired children of incarcerated adults to feel less alone, to have mentoring, and to have as much of a relationship with their parents as possible.

Republican Presidential Candidate Mitt Romney is seemingly the choice of the establishment; although he is not thus far the clear front-runner to be the party’s nominee for the 2012 Presidential election. The powers that be will likely exercise all manner of influence and heavy-handedness to keep Barack Hussein Barry Obama Soetoro in the office of the Presidency, as he has put forth a superb effort to undermine the U.S. economy and to neuter the world’s most powerful military; so as to erase America’s superpower status and make way for the one world system. Where the coming one world system is concerned; it will not be run by Barack Obama. While we do not know today who the Anti-Christ is or will be, we can be fairly confidant that it is not Barack Obama!

While America remains stimulated by television programs such as Jersey Shore and conversely pacified by pageantry such as Miss America; while FOX, CNN, and MSNBC continue to offer wall to wall coverage of a presidential election that may already be decided – the world has crossed the Rubicon and is perched on the precipice of peril. To be clear, there is no attempt here by this writer to encourage disengagement from the political process; as I have always been engaged in it. And certainly, I am in no position to tell grown-ups what they can or can’t watch on television. But, too many are not paying attention to the rest of the world. The safe America shores have suffered considerable erosion; enough so that what happens in the rest of the world has a profound effect on what happens in the land of the free.

We must all be watchers at the wall…