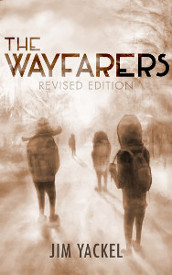 This is an edgy and gritty tale (with gritty dialog by some of the characters) with a focus on the supernatural and possible events that could transpire in today's world.

Too many are heartbroken, hungry and homeless. Millions are a paycheck from disaster, as the dollar itself is seemingly being administered life-support by doctors who are those powers and principalities that we cannot trust. We are all wayfarers on a journey. Indeed, we all merely want to get home. But, there is truly only one road that will get us to that place.

The Wayfarers puts its first step forward with Walking Dreams, paces off the miles in Five Feet From the Cabin Door, and culminates with Jacob’s Trouble.

An intriguing cast of characters that could even be you and your neighbors and friends take both together and separately an unintended journey seeking safety, security, and answers as an America in sudden crisis and the entire world spins out of control into the biblical End of Days. As these individuals are pulled into a natural and supernatural battle against powers, principalities and the rulers of dark places, could they all survive and make it to that place of safety and security? As you survey a radically-changing world today, are you seeking that same eternal refuge? Are you ready to take the walk?

Part One – Walking Dreams:
Can’t anything go right!? He’s a bright, industrious, and creative man whose world is falling down around him as his very life has become imperiled. As he teeters on the precipice of total breakdown; an automobile’s mechanical failure forces this man without an address to begin a walk that was intended to take him to his place of lodging – but would he ever make it there? What colorful and potentially impactful individuals would he meet while on his unplanned walk?

While life is tough for our friend; there are others who have it tougher. The suffering individuals that he meets along the way will bless him, enlighten him, and help to prepare him for an epic journey where he will be called upon to play a role of leadership to others as the Unites States of America is inflicted with severe trauma.

Part Two – Five Feet From the Cabin Door:
The world has been flipped on its head as a distressed young woman is rapidly spinning toward rock-bottom and feels compelled to take a walk to try to clear her mind and relieve her burdens. Little does she know that she does not walk alone; but who or what is walking with her? Does it mean her harm or will it ultimately save her? What on earth drove her to come down to this desolate path? Where does this path lead?

That same day, a spirit-led man is compelled to take a walk because there is a calling he must answer. There is no time to ask questions, and he too finds that he is not walking alone. Time is of the essence as the landscape and the world as a whole may be changing; albeit suddenly and not for the best. Are these individuals running from trouble, or are they running to a sanctuary that will bring them safety and security?

Part Three – Jacob’s Trouble:
Six months after America’s worst day – that being a wave of terror attacks on the east coast – the nation has fallen to its knees. The Christian Church has been raptured, or were the UFO’s in the sky an indicator of a massive alien abduction instead? The U.S. Dollar is on the verge of collapse as rioting and looting mar the streets of the country’s population centers and Martial Law is still in effect – but there are some new sheriffs in town and they are bent on taking over the traditional means of enforcement. Television and radio are being controlled and only one network is left to report the news of the world. It seems that even the weather forecasts are being massaged!

A young man and his brother are being watched by the “new sheriffs” and he is led to head “out back” in an effort to stay on the “down-low.” But, how far out back or how far away will he and his brother have to go in an effort to stay safe? Will they end up going it alone, or will they meet others along the way to make whatever journey they take a safe one? Will a new man on the world scene have any influence on the events that transpire in the lives of the young man, his brother, or the world?