Charleston, South Carolina (CNN) – Rick Perry is telling supporters that he will drop his bid Thursday for the Republican presidential nomination, two sources familiar with his plans told CNN. 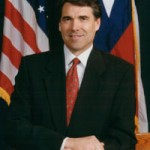 Herman Cain is gone. Michele Bachmann has likewise dropped out. Jon Huntsman has left the proverbial building. Now, Texas Governor Rick Perry is bidding adieu to the 2012 Presidential race, following the lead of the aforementioned Cain, Bachmann, and Huntsman and exiting the Green Room where the GOP candidates each wait for their own shot to take the stage and face the Kenyan King under the heat of the television cameras in seemingly life or death debate.

Ron Paul is still standing, supported and buoyed by a ravenous cult of followers who are seeking “hope” and “change” in a different but equally radical way. Newt Gingrich and Rick Santorum have been allowed to persevere thus far and continue to show signs of life despite being bruised and bloodied by the mainstream media and members of their own party. But after all is said and done, it will likely be Mitt Romney who steps into the ring against the “one” – the anointed false messiah and proud Alinsky-ite Barack Obama.

Romney would appear to be the establishment’s choice. In that role, Romney looks and sounds presidential; a classic, rugged veneer to gloss over the stuffing that will fill the suit. Romney would meet everyone in the middle and all would be pacified and satisfied. But, what we will likely see come November 2012 is not Romney versus Obama but The Establishment versus The Powers That Be – not to be confused with the NBC television series that aired in 1992 and ’93.

This writer plans to vote in the 2012 election, but it is all a charade and a masquerade. I have watched American citizens turn away from the political process, and the patriot in me could not accept it and accused them of being unpatriotic and apathetic. As time goes on, I see that perhaps it’s more than a decline of a superpower’s citizenry; it is a sense of futility that invades the mind and spirit and draws many into their own selfish pursuits because the nation and the world has broken their hearts and quashed the aforementioned spirit. Within themselves they believe they can manipulate and control their immediate surroundings and find a modicum of joy, because outside of their personal spaces there is nothing but pain, heartbreak, deflated American dreams and broken promises of a better world.

This world is on a collision course for radical change; and like an approaching blizzard it is snowing steadily now as the gale-force winds are increasing as they blow in from the Supernatural. It is a storm system that has been forming for centuries but it doesn’t take a meteorologist to see the immediate and colossal uptick in intensity.

Sure, it sounds like a crackpot conspiracy theory, but The Powers That Be are they who control the banks, stock markets, IMF and Federal Reserve. Wittingly or not, by destroying economies for their own selfish gain they are paving the way today for the rise of the Son of Perdition who will run the One World System.

Presidents wield much power, but aren’t they merely kings in a nebulous chess game being maneuvered by unseen hands? We must remember to look beyond the game board and its players and toward the true hope…

… Because there is but one Superpower, and His name is Jesus.