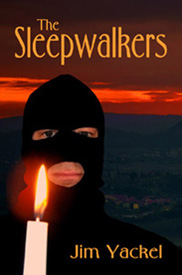 What will it take to shake them awake? A diverse demographic and culture of sleepwalkers live a life of alcoholism, drug use, lotto, computer games, smartphones – and in many cases opulence and haughty self-anointing. But the single thread that ties these various demographic groups together is their ignorance to the collapsing economy and world around them. As the year 2013 winds down, there is a darkness that is sweeping America and the world, and these individuals are collectively blinded to it by self-medication and by The Powers That Be through the entertainment and mainstream news media. The darkness is as much supernatural as natural, and seemingly only a few watchmen can see it coming.

A Christian man named Jeff Seagraves toils in a busy convenience store serving those who choose to stay asleep, and while he is awake and aware those who slumber appear to enjoy a higher quality of life and a greater sense of freedom. As they wallow in the trappings of modern convenience and swallow the lies that the government and media feed them, Jeff suffers through anxiety, depression, fear and worry as he struggles to make ends meet. His faith is strong, but he is not free. Could the roots of his failure and despair be as much supernatural as natural? Could much of his malady be linked to his past?

Jeff relies on the alternative media and YouTube for his news as the mainstream does nothing but facilitate the spread of the darkness. Will he encounter someone online who has inside knowledge as to coming events that will change the world? Will there be an event that will shake the sleepwalking populace into consciousness? Will Jeff ever be delivered of his own darkness and used by God to be a source of light when seemingly all light has been extinguished?

Read an excerpt from The Sleepwalkers Free Below: