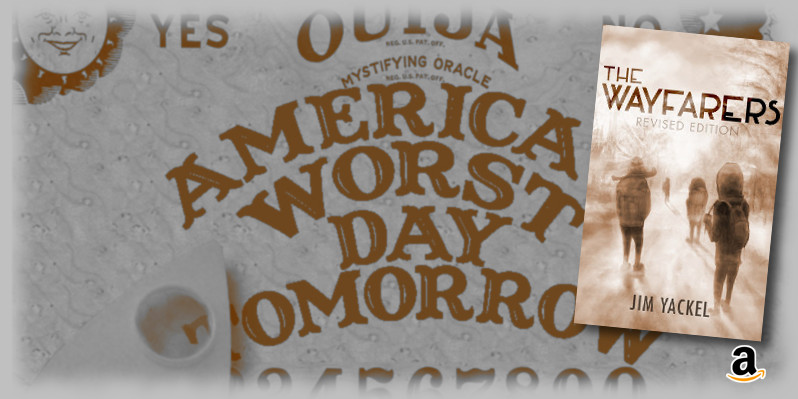 Ouija Board and Rosary Beads

“Oh, she didn’t like me playin’ with my Ouija Board and readin’ books by Aleister Crowley…”

The following is a blog by Josiah “the Eel”, a character from Jacob’s Trouble, which is part three of the new release fiction book The Wayfarers Revised Edition available on Kindle, with the paperback version coming soon. Read and find out more about Josiah.

The folks in this here town always thought I was strange; even before the poop hit the fan. Ha! I knew trouble was comin’ to the U.S. of A before any ‘a them did…uh huh! Yeah, the kids ’round here they always been afraid ‘a me and I ‘spose with good reason! But, I ain’t never hurt nobody too bad; ‘cept when I wrassled for West Genesee High School in the nineteen forties, er was it the eighteen forties – ah, hell, I cain’t remember! That’s why they called me the Eel, ‘cuz I was so slippery nobody could pin me!

Two things I like are fishin’ and my Ouija board. It was my Ouija board that spelled out AMERICA’S WORST DAY TOMORROW and sure enough some baaaaad stuff came about and people was bein’ fraidy cats an’ flippin’ out!

My Ouija board tells me when the Northern Pike will be bitin’, so I go down to the Erie Canal and catch all I kin stand! I just cast out my orange Lazy Ike plug and yell “fish on” and you know what there, dummy? I git one almost every time! You cain’t catch as many Pike as me ’cause you ain’t got enough faith in the power! It’s the power that those injuns conjured up hunnerds ‘a years ago. Some folks say it’s demonic and I say “wellll….it’s done awright by me!” I catch fish and I got rid ‘a my gout, too! Hell – I don’t even gotta eat and I don’t git hungry and I still stay alive!

My wife jus’ up n’ left me. Hell, I ferget her name! Oh, she didn’t like me playin’ with my Ouija Board and readin’ books by Aleister Crowley like “Moonchild” and “777”. She said I changed after I started playing with the board. She tried to sprinkle holy water on me and was always praying with them Rosary Beads. I wouldn’t have none a’ that! She called some priest ta’ come and give me an exorcism, but I done punched him out and sent ’em packin’ with a fat lip and bloody nose! I think it was my wife that drove me loony tunes, not the devil like she says! I mean, a hard-workin’ man only has to stand so much!

I’ll tell you what, jerky – I ain’t afraid a’ the devil; no sirree! And the wolves don’t scare me none. I like feedin’ them critters cause there ain’t no one else t’ do it. I feed ’em whatever or whoever I find! Iffin’ my pension check comes late again this week, Im ‘a feedin’ the mailman to the wolves! Ha ha ha! – is that a Federal offence?