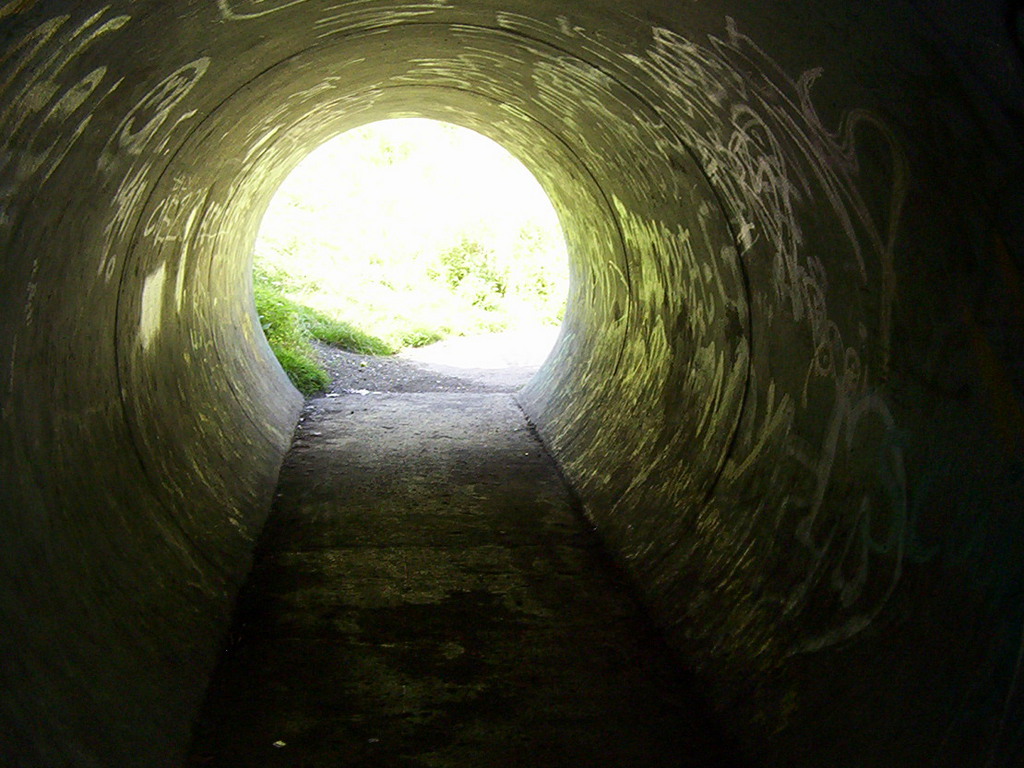 Light at the End of the Tunnel

It’s only the size of a pinhole, but as we walk along the rock and debris-strewn floor of this life’s tunnel we can see it if we keep looking forward. If we keep walking, it will grow larger and brighter, but it seems as though the light at the end is so very far ahead. 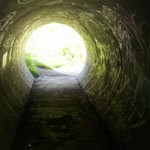 Keep focused on the light

It is dank, dark, and damp down here, and we find ourselves tripping over chunks of concrete, automobile tires, and items that cannot be identified in the low light conditions. Our feet are wet from having to wade through puddles of stagnant water that exude the malodorous airs of rotting moss and raw sewage.

We’ve suffered loss in life because we took chances, and it was those chances that served as soft spots in the ground that allowed us to fall through the path less traveled. While we pursued something different, there are many that we know who followed the prescribed path and today they walk in the light on the firm ground above us, seemingly secure because they “did what they had to do.”

But how secure are they who did what they had to do and followed that prescribed path? Are they only secure in their minds?

Not everyone down here took a chance and failed…

No, we are not alone in the tunnel. There are the intoxicated and the drug-addicted down here. There are the gamblers who cling to the hope of lotto winnings being the ticket out, and that pursuit becomes an addiction that can’t be satiated. There are the angry who lash out at everything and everyone, and we must keep ourselves girded against them. Some are apoplectic due to the frustration of being forced to walk down here, while others are angry because they are hungover or because haven’t had enough to sufficiently satisfy the addiction.

Down here are the unemployed parents with children who are scarcely fed. Likewise, there are the working poor who rely on government assistance to help keep meat in the pot. As we walk forward with heavy-laden packs on our backs, we notice that the numbers of tunnel walkers is increasing. “Hey, I don’t belong down here” we hear some of them say, as they lament “I worked for that company for thirty years and I don’t deserve this! Where is my promised pension? I paid into it!”

None deserve the tunnel but in 2012 more are falling through the gaps in the quaking earth up top; and not just the ground that makes up the path less traveled. The floor of the tunnel is becoming a path heavily traveled below the so-called “prescribed path”, and as more are forced to walk down here the detritus and wreckage become more prevalent and a greater hazard.

With increasing frequency, we can feel the vibration of heavy equipment and the hear the stomping of the boots of tens of thousands of soldiers above us.

At the end of the tunnel we emerge to a peaceful pathway in the warmth of the sun. The path takes us across a small bridge and we then begin to ascend a winding wooden plank stairway into a lush green forest.

Now faith is the substance of things hoped for, the evidence of things not seen. It was faith that got us this far, and that very faith will carry those who can’t walk and invigorate the legs of those who still can.

There is a light at the end of the tunnel. Lord Jesus, we know you’ll come carry us home.